The Nature of
Human Sexuality

Our sexuality is a crucial part of who we are and how we see ourselves in relation to others. The term sexuality becomes easier to understand when it is divided into three parts of sexual orientation, sexual behaviour, and sexual identity.

This refers to the nature of a person’s basic sexual attraction to other people: it may be others of the same gender (homosexual), of the other gender (heterosexual), or of both genders (bisexual). The emphasis placed in our society on heterosexuality as the norm means homosexual and bisexual people can deny, hide, or suppress their sexual orientation.

During the 1940’s and 1950’s Alfred Kinsey, an American scientist, published his studies of male and female sexual behaviour. The prevailing belief at that time (and it probably hasn’t changed a lot today) was that people are either heterosexual, or, in smaller numbers, homosexual. Kinsey’s research showed quite a different picture, revealing a continuum of sexual experience. 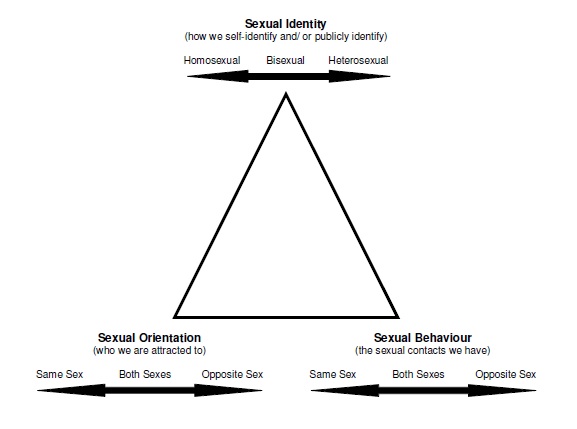 This is how people see themselves to others. Because society favours heterosexuality, most people feel pressured to develop a heterosexual identity.

“People vary considerably, not only in the proportion of homosexual to heterosexual behaviour they practise, but also in the ways their sexual behaviour varies over time.

Actual sex histories reveal that change is common during different periods of a person’s life… No ‘cure’ has been found to have any scientific respectability not only because sexual orientation is not a disease, but also because, varied as it is, sexual orientation hardly ever shifts totally from one extreme to another.”

“For example, heterosexually-married men who later come out as gay almost always have had a prior history of some homosexual response which is often hidden and which might include masturbatory fantasies, dreams, and even secret liaisons. On the other hand, high school boys may be extremely active homosexually, and in later life be happily heterosexually married… Such differences are more reflective of our bisexual capabilities than of major changes in orientation.”